‘Tis the Season for Coffee:

How Coffee Drinkers’ Habits Evolve During the Holidays

Ever arrive at your parent’s house during the holidays to find they only have instant coffee or Folgers Coconut Cream Pie?... Yikes.

Turns out you’re not the only one who cares enough about coffee to actually consider packing your own beans along with presents as you prepare to hit the road for holiday travel.

In fact, fully 25% of coffee drinkers will actually bring their preferred coffee home with them for the holidays. With over 60 percent of the U.S. population drinking coffee, and around 40% of those likely traveling during the holiday season, that’s an estimated 80 million Americans who will pack coffee in their carry-on. 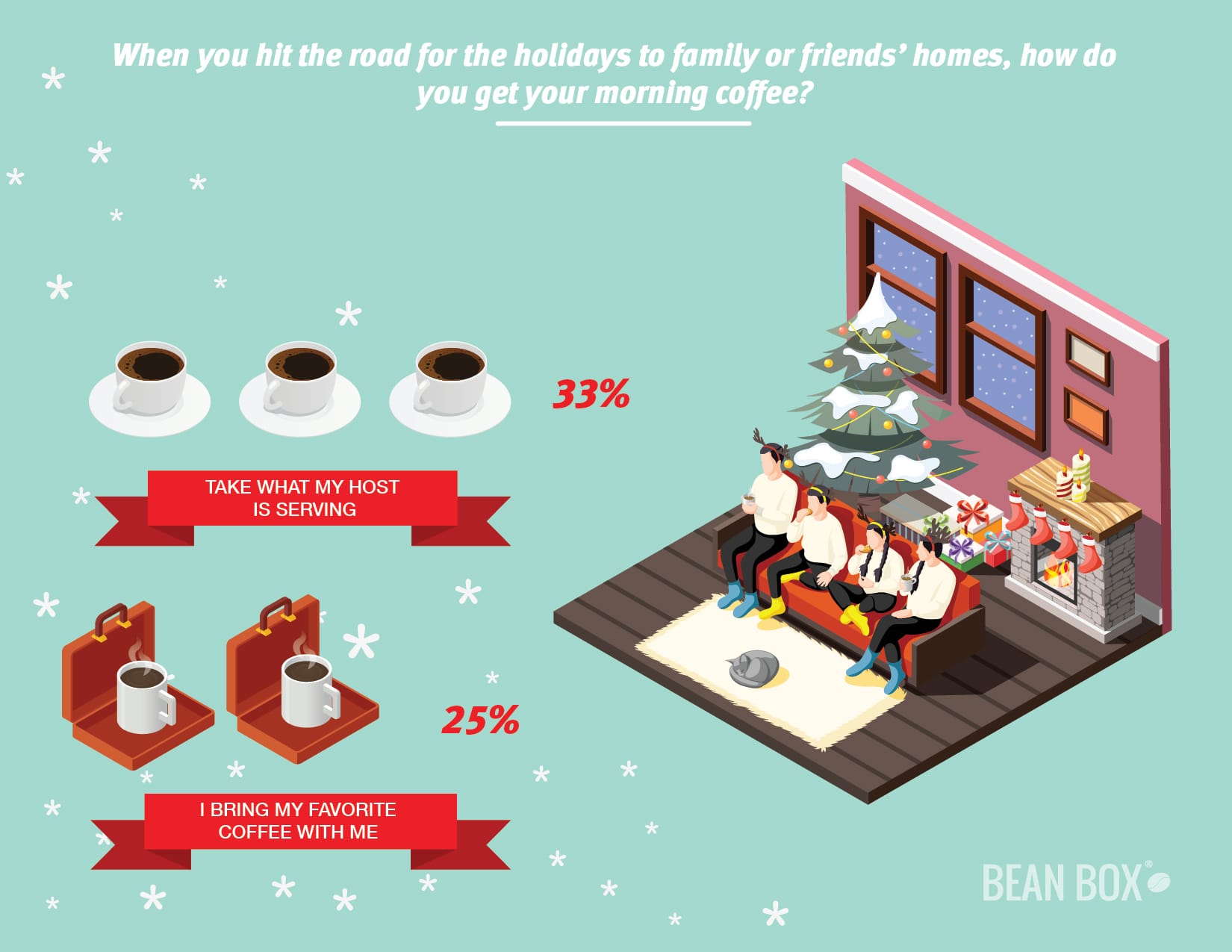 To learn more about how Americans’ coffee habits change during the holiday season, we at Bean Box posed our first annual Holiday Coffee Survey to 1,500 coffee drinkers.

We’re not sure whether it’s the morning after holiday parties, the travel, the hard-to-avoid-forced-family-fun, or wanting to just stay up to watch for Santa’s sleigh, but one thing is certain: as the holidays draw nearer, coffee consumption becomes dearer. 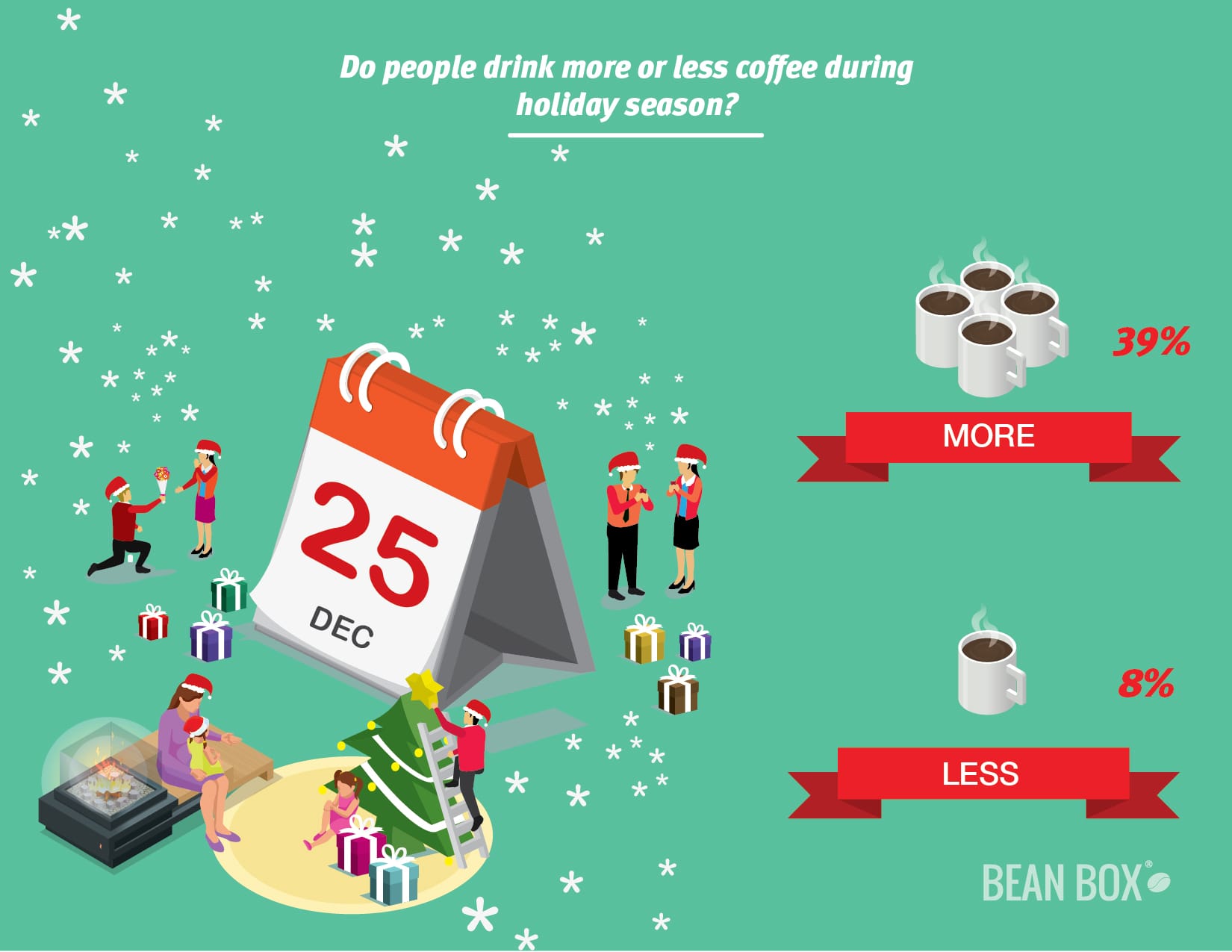 Nearly two-in-five U.S. coffee drinkers (39%) report that they increase their coffee intake during the holidays — a potential sign of the frantic toll the festive season takes on the American psyche. Interestingly, women are considerably more likely (44%) than men (31%) to say their coffee intake goes up over the holiday season.

Coffee is surely the warm comfort that keeps us all feeling better. Amidst the stress that comes with seasonal travel, logistics and planning, the holidays are also a time to kick back and share time with loved ones, and what better way than to do that than over a shared brew? 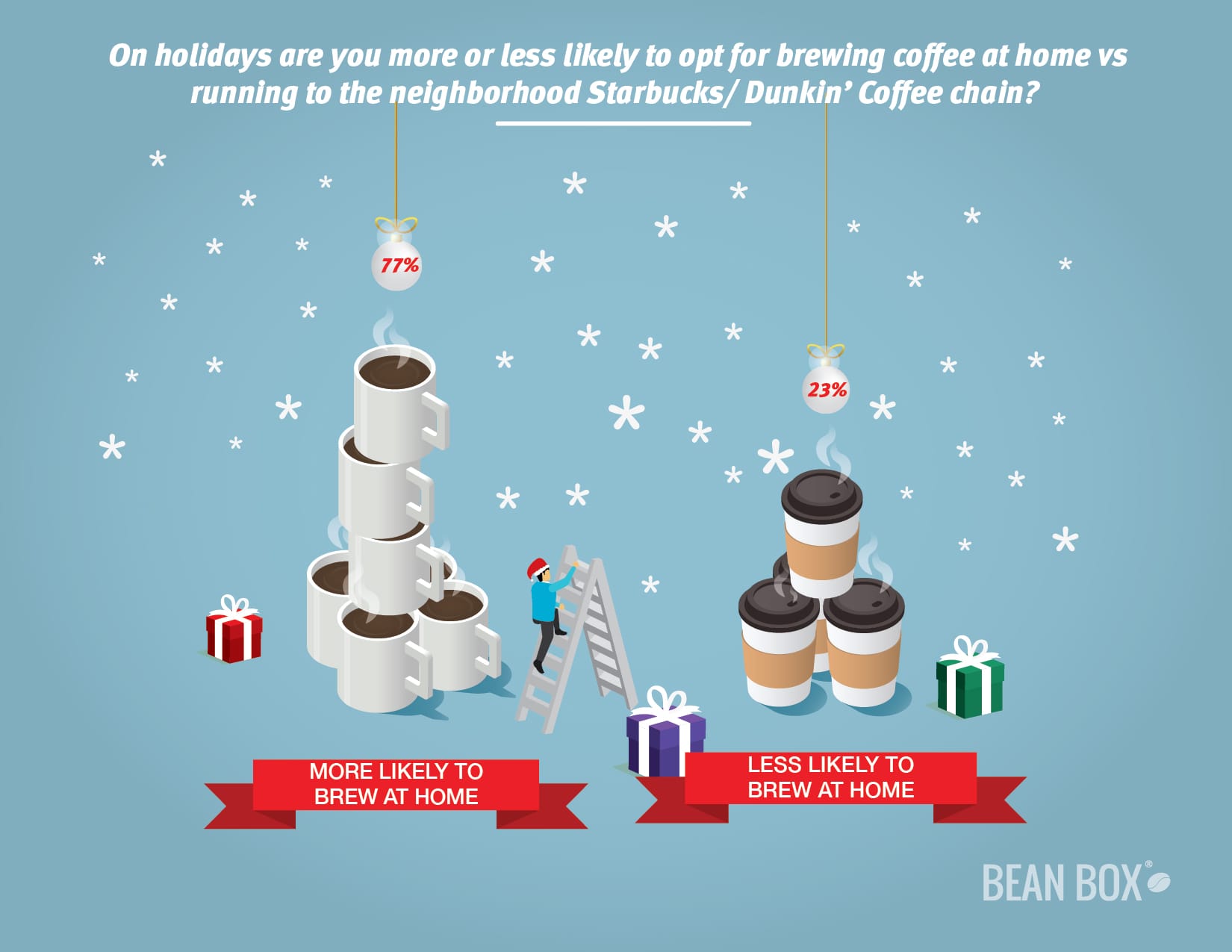 Holidays in general typically mean more home coffee brewing. Although seemingly every Starbucks and Dunkin’ location stays open during major holidays, consumers are sticking to brewing at home. Our study found that 4-in-5 (77%) coffee drinkers say they have a higher likelihood of skipping their neighborhood Starbucks and will opt instead to brew their coffee at home during the holidays. That number increases to 82% for the most avid group of coffee drinkers (those who report drinking multiple cups of coffee a day).

On the flip side, it seems that younger coffee drinkers have grown up with local coffee shops being open during the holidays and are accustomed to stepping out for a coffee -- even on Thanksgiving or Christmas Day. In fact, the number of those more likely to brew at home on holidays within the Gen Z and millennial demographics (18-29) falls to 63%.

What are coffee drinkers brewing at home or within coffee shops this holiday season? While fall’s favorite buzzphrase is "pumpkin spice", and Starbucks has officially launched their holiday drink menu to include themed concoctions like Chestnut Praline, coffee drinkers overwhelmingly prefer plain coffee (73%) over holiday flavors (23%). Among coffee drinkers who are ready to get more festive, the flavors ranking the highest on their list are:

The peppermint-flavored jolt is definitely in favor among Gen Z and millennials (18-29 year-olds), who prefer this flavor the most (29%) during the holidays. If you’re reading this and drooling - don’t worry. Starbucks has a Peppermint Mocha this season just for you.

82% of Consumers Celebrating Christmas Need Their Coffee Before Opening Gifts 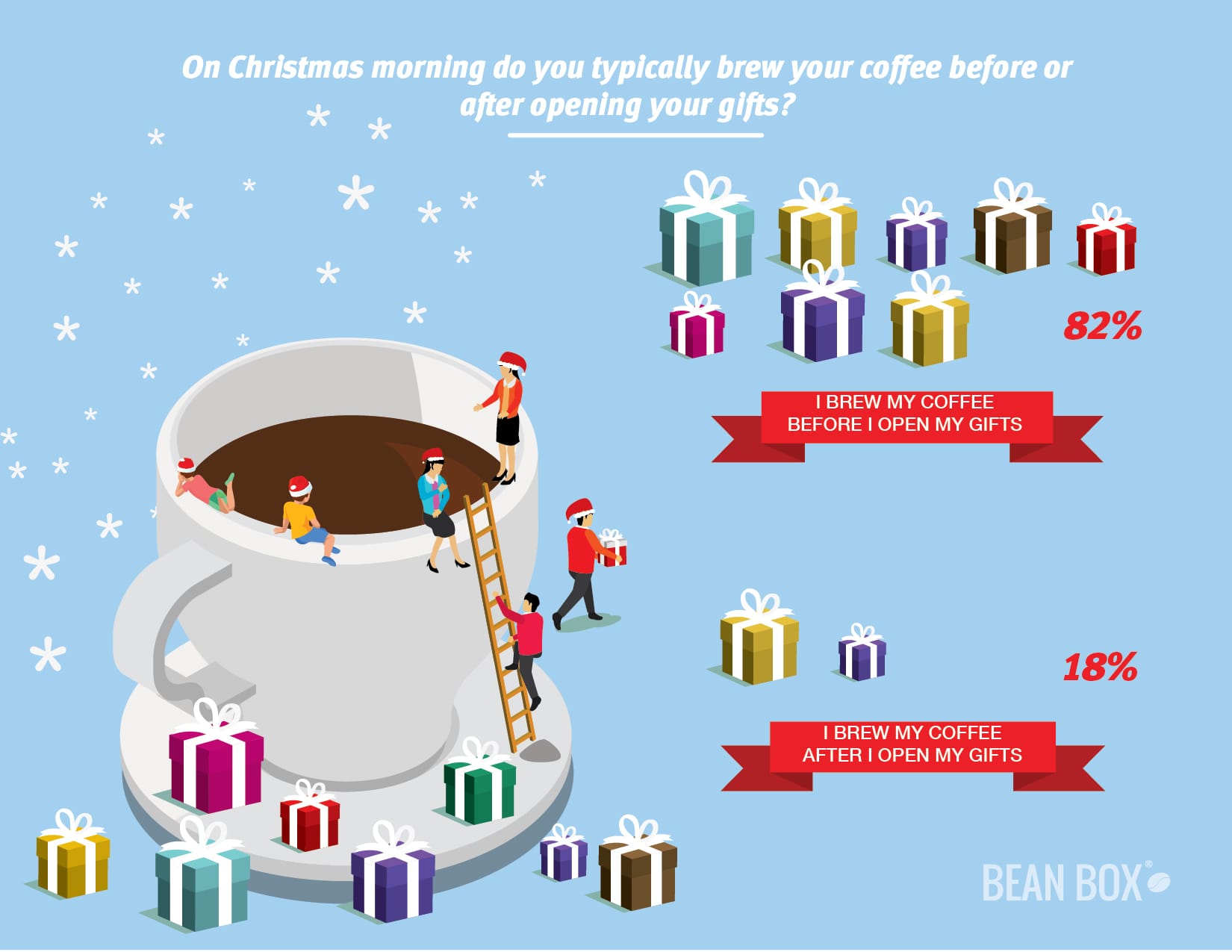 Coffee lovers also showed their brew-first commitment, citing it as a top priority, even on Christmas morning. (Sorry, kids - offee first.) 82% of respondents celebrating Christmas said they would brew their cup of morning coffee before opening Christmas gifts.

Hopefully, those gifts include the gift of coffee! 17% of respondents (a dismal percentage, we believe) say they’ve never received coffee as a Christmas gift. That’s a sad statistic, given over half (55%) of coffee drinkers say they are willing to pay more for premium coffee brands during the holidays as compared to throughout the calendar year.

The number jumps even higher for serious coffee drinkers (those who say they drink multiple cups of coffee each day), with 60% of this group saying they’re willing to pay more for premium coffee brands during the holiday season.

For those who have been lucky enough to receive the gift of coffee, 1 in 3 have pointed to coffee brewing equipment as the perfect holiday gift. But with great coffee equipment comes great responsibility: to brew great beans!

Here are the highest-ranked coffee-related gifts according to the survey:

Since it is the season of giving, we also decided to ask coffee lovers if they plan to pay it forward by leaving a beverage out for Old Saint Nick. Only 7% of respondents would choose to give Santa any of their coffee, with a majority (51%) claiming they'd keep both the coffee and the milk for themselves. Hopefully, Santa will receive piles of cookies to make up for it....

What are you planning to leave out for Santa?

Whether you choose to share your coffee or not this year, the research is clear: it’s the happiest time of the year to brew and enjoy your favorite coffee with friends and family!